Ski racing is an exhilarating, thrilling and daring sport. For about a minute, skiers sit at the edge of control, pushing for every millisecond the mountain offers. With legs burning, vision blurred and the wind howling through your helmet, it truly is an opportunity to escape the comfort zone we spend most of our time sat in. In those breath-taking seconds of almost freefalling down the mountain, some of the biggest gains in personal development can be made, which undoubtedly contribute towards the enhancement of the Army’s moral component of fighting power. It is, for this reason, every year the Army holds alpine skiing championships. The Infantry run EXERCISE FROSTED BLADE in order to train a breadth of soldiers, from already experienced skiers all the way down to complete novices to compete and develop themselves.

The team from 5 Rifles headed out to the snow-swept slopes of Val D’Isere in early December, full of ambition and excitement for the weeks to come. After settling into the cosy set of apartments in the small but lively town, it was only a handful of safety briefs, boot fittings and getting to grips with walking in ski boots until the Team were on the first chairlift up the mountain. Expert instructors took groups off based on the ability to either teach from scratch or develop the already existing technique of those who had skied before. Despite plenty of falling over for both parties in the first week, after seven days there were parallel turns coming out from novices and short radius carving from those already established competitors. This exhausting learning phase of the exercise was vitally fuelled by the evening team meal, with Cpl Humphrey’s ever-improving gnocchi dishes and vegetarian Bolognese allowing the team to step up to a professional level of nutrition. There was also an opportunity for the team to witness the best that ski racing had to offer as the World Cup Ski circuit visited the resort. Unfortunately, UK’s finest skier, Dave Ryding, was unable to provide a performance the heavily British crowd wanted to see down the world-renowned “Le Face” slope.

A huge dump of snow that saw over half a metre of powder cover the slopes would set the ideal conditions for the transition into race training in the weeks to come. An entire race piste closed off and dedicated to training provided the perfect opportunity for the team to have their first attempt down gated slopes. The difference between this and freeskiing is that instead of being able to choose your moment to turn, the line of the slope is forced upon you by alternating coloured poles in the ground that skiers need to turn around. Transitions in weight need to be made instantly and pressure on hips and knees is enormous to make it from gate to gate. The professionalism wasn’t only limited to the slope set up, however, and the team began to don skimpy tight-fitting race suits, giving minimum air resistance at high speeds if not much in the way of insulation. Personal protective equipment was also needed in the form of attached slalom specific hand and shin guards in order to stop team members from smacking into the ricocheting slalom poles as they fist-bumped their way down the quickest line available.

This battle rhythm would continue right the way until race week, disrupted only by four days of leave for Christmas, in which some team members headed home via Geneva airport to the warmth of home, and others continued to make best use of the ideal weather and ski through Christmas in the now quieter resort. There was also a surprise appearance from Father Christmas himself in the team apartment as some woolly Christmas socks and hand warmers presented themselves while Rfn Neesam and LCpl Brennan decided they deserved a lie in.

This brief period of freedom was soon to end though as race week beckoned in the new year. A series of time trials building up to the week allowed each member of the team to be accurately seeded according to ability as they progressed onto the technical and challenging race slopes. Giant Slalom came first, which saw the team Finish 3rd overall and LCpl Owen win the competition with a risky but subsonic second run. Super G and Downhill races followed the steepest and fastest disciplines of the sport, using the longest skis and requiring a detailed visualisation of the course as skiers often go into corners blind, using waypoints in the distance as aiming markers. Yet all members of the 5 Rifles team made it down both events safely and with good times. Lastly would come the Slalom and Combined events, which saw a jump in the ranking; 5th for Lt Rogers in the combined event as he finally found his nerve. This was the last event before a prize ceremony declaring 5 Rifles to come 3rd overall in the whole competition out of all teams in the Infantry, and LCpl Owen the 2nd best skier on the exercise. Brave performances all around that were celebrated heartily before the team closed down and headed home. 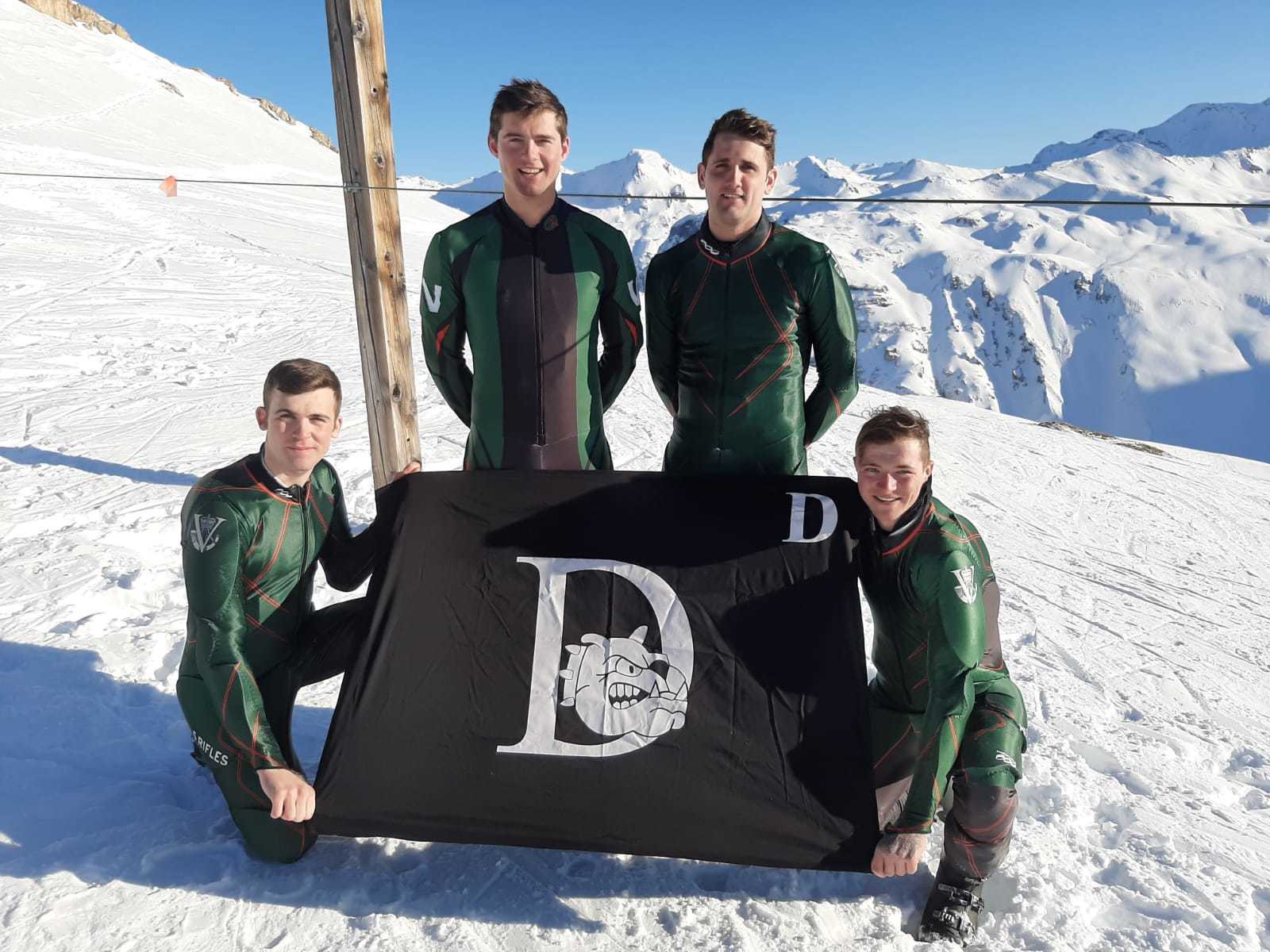